Personal Experience of a CT Vet Homeopath With Lyme Disease 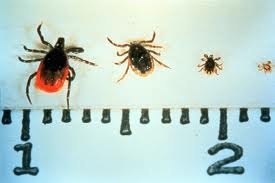 What follows is my own experience with homeopathic treatment of my Lyme disease. I have been asked several times to share this. Usually after a client’s pet has received treatment. It is not meant for anyone else to emulate.
Over Father’s Day weekend of 2001 we had a house full of company. That Friday, I started feeling flu-like symptoms of heavy eyes, decreased appetite, muscle soreness, weakness, and was running a low-grade fever.  I typically ignored such minor deviations from health since I trusted my body to do what was best for it.

Tincture of time almost always worked in my favor. Unfortunately, not this time. I had forgotten about the attached deer tick and bullseye rash which I had found on my right thigh the prior week.

My family was visiting from Philadelphia and Cherry Hill and we were having a lovely weekend. I’m so glad that no one knew that I felt “blah”since this turned out to be the last Father’s Day that I would share with my parents.

By that Sunday when everyone was set to depart, I felt exceptionally weak and a little disoriented. I decided to take my temperature even though I rarely bothered with such things. It was 103. This was particularly significant as my baseline temp is often below 98 degrees.

“OK, fine” I thought, so I’m run down from catering to my guests and playing tennis this weekend. “I’ll just rest and I’ll be ready to see my patients tomorrow”. I was very wrong.

Within a few hours of taking to my bed to rest, my temp went up to 104. I became so weak that I was barely able to get up. When I tried to stand, my equilibrium was off and I could barely walk straight. I still wasn’t overly concerned, but my darling wife was very upset.

I don’t have much recollection of the next few days aside from my temperature kept rising but I couldn’t. At the 105 degree point my wife was frantic and ready to call an ambulance. I wouldn’t let her. I still had faith in the healing abilities of my body.

Fortunately, I was already working with an expert ND homeopath, Dr. Howard Fine. I had also recently become certified in veterinary homeopathy (after cure of my lifelong allergies, but that’s a story for a different day). My wife left a message for him Sunday night.

Monday morning, he recorded my symptoms in detail. Not just the common symptoms seen with Lyme, but the totality of my specific symptom picture. Was I thirsty, restless, feeling hot, chilled, etc.  He then prescribed a homeopathic remedy designed to help my body rally its’ defenses.

With a few repetitions of this first remedy, I felt better, but kept relapsing. Later that day, Dr. Fine prescribed a different remedy. I again felt better, but by Wednesday my temperature was back up to over 104. I still had no appetite, horrible chills, and debilitating vertigo that prevented me from getting out of bed (had I wanted to get up). My wife was even more frantic.

Around noon that day I spoke with Dr. Fine again and he prescribed a new remedy. He had been pondering my case and had a fresh take on my symptom manifestations. Well, I’ll tell you. Had I not already seen miraculous responses to homeopathic remedies, I would not have believed the changes that I felt.

I took the remedy and within moments I could feel some of the tension and heat leaving my body. When I felt my improvement stop, I redosed the remedy. Kind of like building a fire. No need to add fuel (wood and air) as long as the fire is growing.

By that evening my appetite had returned, I was out of bed, and my fever was minimal. By the next day I was back on the tennis court (though unfortunately still playing poorly)!

Since then I have removed many ticks from myself but have never had a similar problem. Perhaps my immune system was strengthened by working through the dis-ease. Who knows? This sure would be a wonderful “side-effect”!

A few weeks later I went to the doctor for a routine checkup and mentioned my experience. He found it amusing (since I obviously didn’t have Lyme). Imagine his surprise when my Lyme titer (antibody level) came back so high that it was off the charts.

I owe a debt of gratitude to Dr. Howard Fine who both treated me and was a mentor of mine in my studies of homeopathy. Since then I have seen many patients diagnosed with Lyme disease, and in a future article I will share my experiences and thoughts about it.