Holistic Management of Dogs That Jump on People 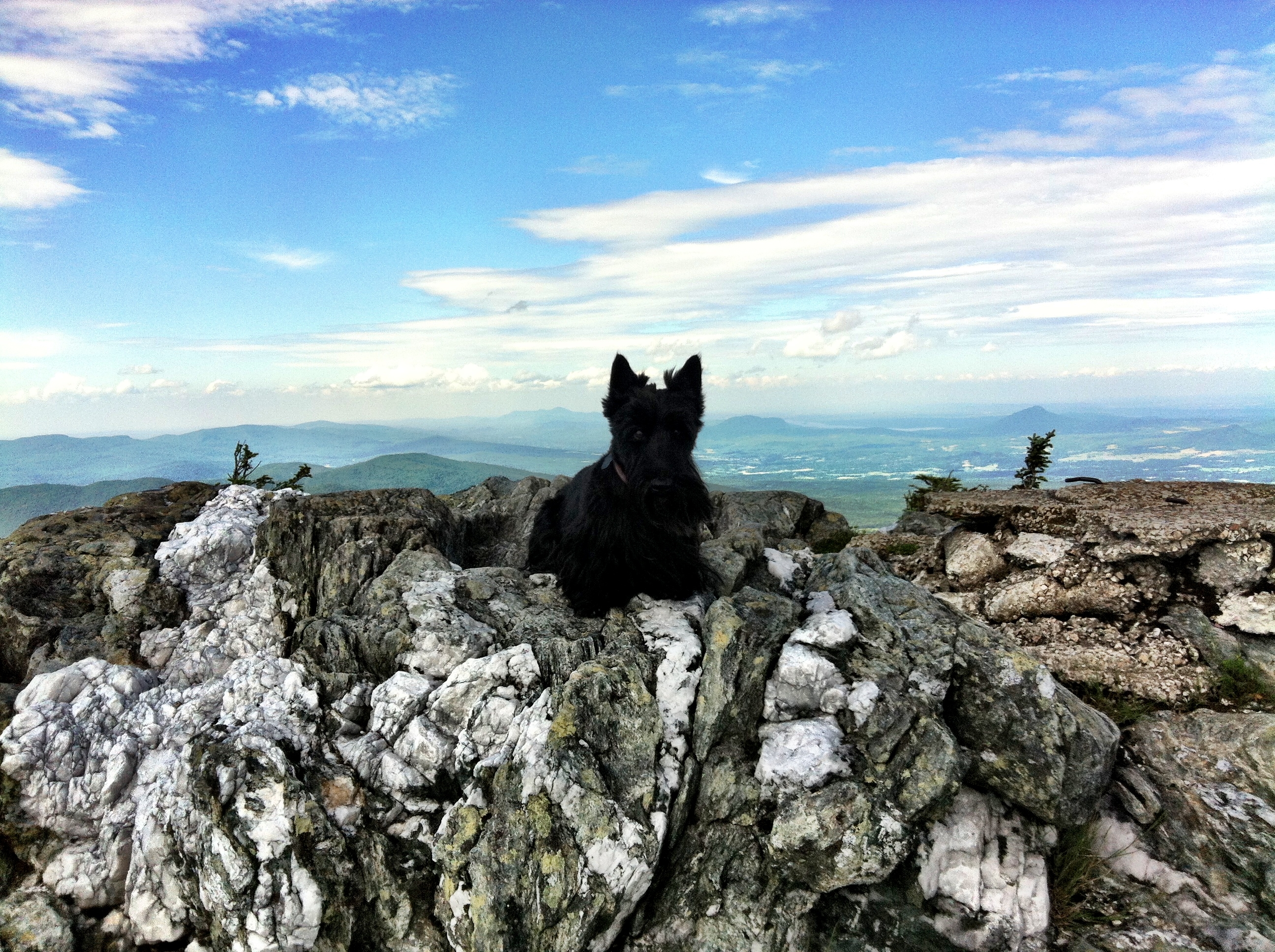 A bad habit that many dogs share, jumping up on people is both annoying and dangerous. Unfortunately, its a behavior that can be very self-reinforcing for the dog. Some dogs just like to do it, but most have been rewarded for it often enough that they will try it as a matter of habit, hoping that it’ll get them some attention- even if its negative attention, like yelling at the dog or pushing him off.

More often than not, someone is positively reinforcing the dog for jumping, either inadvertently, by unconsciously allowing it sometimes, or by blatantly inviting the dog to jump up when greeting or playing.The problem is the dog doesn’t understand that its ok to jump up when you’re wearing jeans, but not when you’re wearing a dress clothes or that its ok to jump on 17 year old Billy, but not 87 year old Grandma. So, like the good little opportunist he is, the dog tries it with everyone, hoping it’ll work “this time”. For some dogs, even knocking someone over is fun, not because they’re aggressive, but it just adds a little excitement to their day. There are also some dogs who use jumping as a dominance gesture- by physically guiding your movement, they very subtly control territory. Our approach to solving jumping problems follows our basic training philosophy of LEADERSHIP, MANAGEMENT and TRAINING.

LEADERSHIP- Hopefully you have already started on having your dog on the “Nothing In Life Is Free” program of having him do a little something for you before getting any of the good stuff in his life. If you haven’t, start NOW. For this stage of your new Alpha status with your dog, we’re going to focus on territory. For this discussion, territory doesn’t mean the house or yard or neighborhood, it means the space the dog is occupying right now. When your dog wants to go out, make him sit and wait as you put his collar and leash on. Make him wait again as you open the door and walk through before him, then release him to come through the door. Do the same thing on stairs- don’t let him barrel past you, body-blocking you as he goes. If he’s lying across a threshold or in the middle of a hall (more subtle territory control maneuvers), don’t walk over or around him. Instead, make him get out of your way by shuffling your feet into him until he moves. You can use the same shuffling technique to teach him to yield space to you when you are on walks, and whenever he is just walking around near you, too. If he’s laying down in his preferred spot, make him move and sit down in his space for a few minutes (it sounds silly, I know, but it is a very powerful message to the dog). In turn, don’t let him push you out of your preferred spot!

MANAGEMENT-Ok, so we’re on our way to a good relationship with our dog, what’s next? The most important thing is to not let him practice the behavior of jumping up. Remember, everything gets better with practice, and he’s too good at this already! First, we have to have a way to physically control the dog(we already know he’s not going to control himself). Very simply, have him on a leash or houseline whenever you are with him. If he’s in a situation where he’s likely to jump, step on the leash right where it touches the ground straight down from his collar. That way, if he does jump, he’s going to correct himself. The next thing we have to do is to control his environment so that he isn’t rewarded for jumping. This means you have to take a zero-tolerance position for jumping on anyone- even those people that say “Its ok, I don’t mind” until he stops trying. Even when its inconvenient or you are so embarrassed by his behavior that you would rather pretend he’s not even your dog! You have to make absolutely sure that no one is rewarding him for jumping, or he will never give up trying.

TRAINING-or really, re-training. What we’re going to do next is teach him a mutually exclusive behavior for greeting people. I use the sit for greeting. He can’t very well be sitting and jumping all over someone, now can he? Remember, he’s had lots of practice jumping on people, so we need to give him lots of practice at not jumping on people, too. If you wait for someone to ring your doorbell to practice, it isn’t gonna happen. You have to set up training opportunities so that he gets enough repetition to learn what you want him to do. You can invite several friends over staggered out over a Saturday afternoon to practice. If your house allows,  have them come in through one door and leave through another, wait a few minutes, and “arrive” again  so each person can go through a couple of repetitions. You can either stand on the leash as described above or you can tether the dog to something sturdy that is far enough from the door to allow the person to enter. If you choose the tether method, the person should enter and stand just out of the dog’s reach. If the dog is hysterical, have the person turn their side or back to the dog and ignore him until he’s calm. When he is calm, tell him to sit (firmly but quietly). When he does, the person can face him and praise him quietly. If he stays calm, they can pet him for a few strokes before straightening up. If at any time, he “loses it” and gets hysterical, they should turn and ignore him again until he calms down. Outside your home, you can take him to dog parks or pet stores and do the stand on the leash technique to practice. Instruct everyone that wants to pet your dog that they can only pet him if he is sitting. You can even give each person a treat or 2 to give him when he sits (stash a container outside the front door for your home training party so each helper can grab a few before knocking).

Punishments for jumping may have to be considered if your dog is  extremely determined or has such a long history of it that he can’t give it up, although it is more  often  a case of an owner that didn’t follow through with leadership, management and training. If you do have to resort to punishment, remember the rules: Is it happening right now? and: Is the punishment I’m using decreasing how often the behavior is occurring? If its not happening now, then its too late, and if its not decreasing the frequency of the behavior, then its not punishment, its nagging. The punishment you choose will depend on your dog, his size and his temperament. I usually start with walking into the dog as he’s getting ready to jump on me, knocking him off balance and then praising when he has “4 on the floor”. I greatly prefer this to the “knee him in the chest” method, which is often painful, and can be dangerous, for both you and the dog. You may also want to try a blast from a squirt gun, spray bottle or Binaca® as he’s jumping up. Still other dogs respond well to a dog bomb, empty, capless 2 liter soda bottle or rolled up and taped towel tossed at their hind feet. The towel and 2 liter bottle may also be used as “boinkers” on large dogs. Based on his behavior, your dog will tell you what works best for him.

As with many other nuisance behaviors that dogs engage in, jumping up on people can often be reduced by giving the dog enough exercise to satisfy his energy level. Many breeds have been selectively bred for their ability to work virtually all day. When we bring them into our home, leave them alone all day with nothing to do, and then expect them to lie quietly by our feet as we relax in the evening, its no mystery why they’re bored, frustrated and act out. All that energy has to go somewhere, right? Walking, even if its several times or miles a week, is rarely enough, so engage in a good game of fetch, swimming or playing with other dogs to wear him out- a tired dog is a well-behaved dog! For jumping problems that occur at home, it helps to make your arrivals and departures as low-key as possible. If your dog is hysterical when you get home, ignore him until he is calm. Over time, he’ll calm down faster, realizing that you aren’t going to acknowledge him until he is.