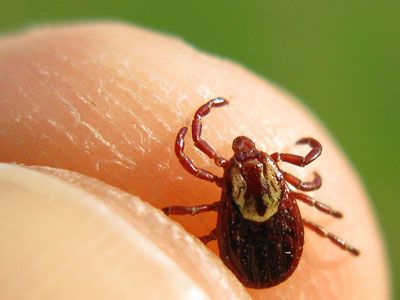 White-tailed deer and white -footed mice appear to be natural carriers. The disease is caused by Borrelia burgdorferi, a corkscrew-shaped bacterium. The organism is usually transmitted by the pinhead-sized, dark brown nymphs of deer ticks. Other types of ticks may also transmit the disease.

After the larva hatches from the tick egg, it attaches to small rodents, such as the white-footed mouse. As it feeds on the mouse’s blood, the larva becomes infected with the Borrelia organism. The larva matures into a nymph, which feeds on the blood of animals and people. The Borrelia organism is not injected into the host animal until the tick has been attached for at least 24 hours. Though adult ticks can also spread the disease, the nymph stage poses the greatest threat during the summer months because of its very small size.

Symptoms of Lyme Disease in dogs and cats

Borrelia burgdorferi is related to the causative organism of syphilis. Both diseases are called the great pretenders because of the wide variety of their symptoms.

Many people having the disease develop a characteristic rash at the site of the bite within 3 to 30 days. For these people, the disease can be easily diagnosed at an early stage. However, symptoms of Lyme Disease are more difficult to detect in animals than in people. There is recent evidence that topical treatment immediately after a tick bite can kill the organism before it spreads and prevent other symptoms.

Many dogs affected with Lyme disease are taken to a veterinarian because they seem to be experiencing generalized pain and have stopped eating. Affected dogs have been described as if they were “walking on eggshells.” Often these animals have high fevers. Other common early signs include lameness, fever, joint swelling and pain, and swollen lymph nodes. Within days, weeks or even months, more serious signs develop, such as heart, brain and joint disorders. Painful joint swelling is the most common advanced sign.

A person is unlikely to contract the disease from a pet unless he were to remove an unattached tick from the pet and allow the tick to feed on him (though there is evidence that pulling a tick off with the bare hands can transmit the disease so use a Trix tick remover).

The Borrelia organism has been found in the urine of infected animals, but the disease has never been proven to be spread via the urine.

Protect Yourself: For walks in woods, fields or meadows during the tick season, protect yourself from tick infestation by wearing clothing in a way that prevents ticks from gaining access to your skin (long sleeves and pants with cuffs tucked into socks). Wear a hat to protect your head. Apply essential oil and other natural and non-toxic sprays to decrease your attractiveness to the ticks. Unfortunately, nothing aplied topically, event strong insecticides, will keep all of the ticks away.

Close Inspection: Always closely inspect your pet and yourself after walking in woods, fields or meadows. If your detect any ticks, do not crush the tick’s body during removal. Rather, use tweezers or forceps (or a specialized tick removal device such as the Trix tick remover) to grasp the tick’s head as close to your pet’s skin as possible, and gently remove the tick to avoid separation of the tick’s head from its body.

The key to prevention is keeping your dog from being exposed to ticks. Ticks are found in grassy, wooded, and sandy areas. They find their way onto an animal by climbing to the top of a leaf, blade of grass, or short tree (especially cedar trees). Here they wait until their sensors detect a close-by animal on which to crawl or drop.

Keeping animals from thick underbrush reduces their exposure to ticks. Dogs should be kept on trails when walked near wooded or tall grass areas. In areas of heavy exposure, acaracides (not insecticides) and repellents (such as Avon Skin So Soft) can be used to control tick infestation on your pet. Preventic® collars (prescription collars only for ticks) are the most effective products available.

In my opinion, neither the recombinant nor the bacterin vaccinations for Lyme disease are safe (though they can be effective at preventing the acute disease). The recombinant vaccine uses the same recombinant DNA technology as the human vaccine. The human vacccine has been recalled. There is currently a class action lawsuit against the manufacturer of the human vaccine. Dogs at high risk should receive preventative homeopathic treatment, species appropriate (fresh meat-based) nutrition, and close daily inspection (if in a high-risk area).

Even if they still get the disease (due to overwhelming exposure) acute treatment (both with homeopathic remedies and antibiotics) is usually highly effective. As always, prevention is the key.

Fortunately Lyme disease, when caught in the early stages, is easily treated with homeopathic remedies and oral antibiotics. Antioxidant supplements, and other nutrients speed recovery. In the later stages however, intravenous therapy with more powerful antibiotics is sometimes necessary (though early homeopathic treatment can prevent this). This is especially true when Lyme disease involves the central nervous system. Please consult your vet immediately if you suspect that your pet is ill.

Post-Lyme disease syndrome may develop after the organism has been succesfully eradicated but the underlying immune imbalance still exists. This is an inflammatory condition which mimics the actual disease. A regimen of vitamins, minerals, and supplements including natural antiinflammatories can be used to treat this condition. Homeopathic treatment of the underlying disease which allowed the Lyme organism to overwhelm the immune system in the first place is the treatment of choice.

For a lengthier, illustrated discussion of Lyme disease (and its’ conventional treatment), see the U.S. Centers for Disease Control and Prevention public information guide, Lyme Disease